For 365 days, Laura would carry her personal camera to the foot of Leuty Avenue in Toronto’s Beach neighbourhood and photograph the area’s historical landmark, The Leuty Lifeguard Station. What resulted was a fascinating informal study on one of Toronto’s historical landmarks and its significance to a busy and ever-changing environment.

The Leuty Project was later exhibited in Identity: Art Inspired by the Great Lakes, at the Office of the Lieutenant Governor of Ontario in Toronto’s Queen’s Park.

This website has been preserved as the original unedited TheLeutyProject.com exactly as it appeared in 2013 & 2014.

The following write up is Laura’s original preserved “About” section of The Leuty Project, written at the beginning of the project in 2013. 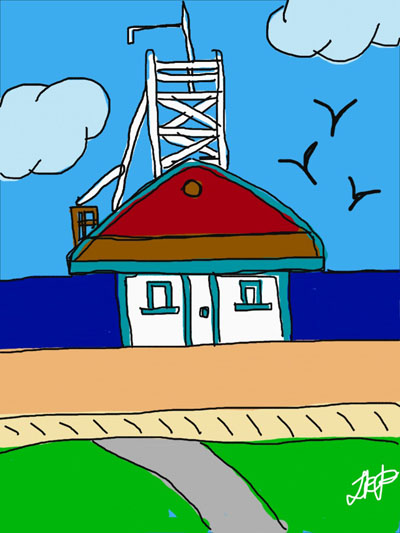 One photo of the Leuty Lifeguard station. Every single day, for one whole year.

We all tend to take for granted the beauty of the things around us.  Whether it be the trees in our backyard, the history of the buildings we work in, or even that old house at the end of the block. Its amazing what we miss when we aren’t really looking.

Originally from western Canada, I’m a daily newspaper staff photographer who got an exciting opportunity to move across the country and expand my career. But this isn’t really about me. I’m just providing some context.

I’ve seen dozens, if not hundreds of images of the Leuty Lifeguard Station. Who wouldn’t want to capture a photo of the iconic building? There is a lot of truly beautiful imagery floating around out there of this house.

As a photojournalist, I take photos of people. That’s just my thing.  It comes to me just as natural as breathing does. My goal is to capture not only the lifeguard station but the people and environment around it. The building is in one spot, but that doesn’t stop everything from moving and living around it. I’m just helping provide an outlet to bring that life to a new level.

One photo. One frame. One background. For 365 days. Welcome to my work in progress.